BOB CACCHIONE took a bowl of jelly beans with him the first time he went to the White House to meet Ronald Reagan. But before he could deliver his gift, the president’s director of protocol dumped out the jelly beans and left the room. She returned a few minutes later, the bowl now filled with the Jelly Belly brand jelly beans that were President Reagan’s favorite.

“They were the only jelly beans the president would eat,” he said.

Mr. Cacchione, then a senior executive at Cartier, was there to present gifts that President Reagan and his cabinet officials might give on official trips. But as a result of their three in-person meetings, he became a collector of Reagan memorabilia, including the blazer buttons and cuff links Cartier made for him.

But he also bought the second Lincoln bedroom set, which is for guests at his home in Chicago. “Mary Todd Lincoln ordered two and canceled one,” he said. “She caught a big backlash on the amount of money she spent redecorating the White House.”

Mr. Berg did not want to specify how much he paid for his Lincoln bed, whose provenance was confirmed by Bill Rau, a New Orleans antiques dealer who bought it from a family in western Illinois. He said only that it cost him $50,000 to $100,000, adding, “The only antiques in my house are in that bedroom.”

In some ways, the collection of presidential memorabilia is a subsection of collecting Americana or antiques. But given the finite supply of presidential material, the uniqueness attracts people with very specific interests.

Some collectors like campaign buttons, programs and placards from conventions, or flags. Others focus on specific presidents.

Collectors and dealers say political parties matter less for collectors than the piece or particular president.

“It’s the item,” said James Gillis, who handles global sales at M. S. Rau Antiques in New Orleans. “There are only 44 presidents. No presidential materials are negative. People from all over the country collect them.”

Lincoln memorabilia are coveted most, and are among the best investments, followed by items associated with George Washington and the two Roosevelts. In more recent times, John F. Kennedy and Ronald Reagan have become popular among aficionados.

Experts say buying memorabilia with an eye toward potential value requires focus, caution and patience. Fakes are certainly a problem. But there is also a lot of historical but worthless material in the marketplace.

Take presidential campaign buttons. Ted Hake, the owner of Hake’s Americana and Collectibles in York, Pa., and an expert on buttons, said the first campaign buttons as we know them were for the 1896 campaign between William Jennings Bryan and William McKinley.

“They cranked out thousands of designs for each candidate,” Mr. Hake said. “The button was such a novelty that everyone jumped on the bandwagon. Buttons swept the country.”

But because of that supply, Mr. Hake said, a 120-year-old button is worth about $10 today. Yet any button made for the 1920 presidential campaign that has both James M. Cox for president and Franklin Delano Roosevelt as vice president on it is valuable. He said one in good condition could be worth $25,000, with perfect examples worth as much as $150,000.

For those wondering about Donald J. Trump or Hillary Clinton buttons, he said most would probably be worth little because buttons are not the marketing tools they once were and are not being produced in large quantities by the campaigns.

“The ones that are worth something were made for an official purpose in a local area and produced in small quantities,” he said “‘Transportation Workers of Bergen County for Hillary’ — they might only make a couple hundred of those.”

Similarly, buttons from President Obama’s Illinois State Senate races are rare and could be worth $200 to $300.

“The most common mistake is trying to buy it all,” he said, since buttons are small and easier to store than other types of memorabilia. “Sooner or later, the material is going to overwhelm you.”

And if it doesn’t overwhelm you, it could just be an expense, not an investment. “You need to be a specialist in one area,” said Jeff R. Bridgman, an expert on American flags. “Generalists make a lot more mistakes. Documents, buttons, ribbons, porcelain — each has its own eccentricities.”

Morris W. Offit, the chairman of Offit Capital, a wealth management advisory firm in New York, said his initial interest in presidential collecting was set off when he tagged along with his wife to an antiques fair and saw American flags with the stars arrayed differently. (The star pattern wasn’t set until an executive order from President William Howard Taft in 1912.)

Mr. Offit now has over 40 flags displayed around his office, including some with different star patterns and some with the names, faces or slogans of candidates on them. “You become pretty picky over the years,” he said. “I look for something that is different, has a little narrative associated with it or gives some insights into that period of time.”

After 15 years of collecting flags, he said one still eludes him. In the election of 1860, Lincoln ran against three other candidates: John Bell, John C. Breckinridge and Stephen A. Douglas. 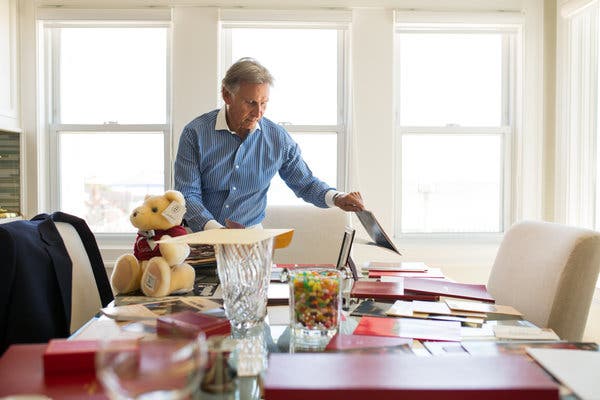 “These pieces are very important to me,” Bob Cacchione said of his Reagan memorabilia. “I not only helped create them but they became world renowned. I’m very proud to have this collection.” (Credit...Christopher Capozziello for The New York Times)

He has Lincoln, Bell and Douglas flags. “A few years ago, a Breckinridge came on the market,” he said. “The price was not within my capability.”

Mr. Offit didn’t want to discuss what he had paid for his flags. But some flags fetch six figures. A United States flag with the presidential seal that flew over Franklin Roosevelt’s home in Hyde Park, N.Y., sold for $98,000 two years ago.

“It was given to William D. Simmons, a member of the White House staff, by Eleanor Roosevelt as a gift for such long service to Franklin Roosevelt,” Mr. Gillis said.

But how could a buyer be sure that a particular American flag really flew over Hyde Park?

In this case, Mr. Gillis acquired the flag from descendants of Mr. Simmons. But he and other dealers stressed the importance of knowing where something came from. “Provenance is everything in this business,” he said.

Mr. Bridgman said he recently brokered a private sale of a flag from Lincoln’s second presidential campaign with his image and slogans on it. The flag fetched over $500,000, he said. But campaign flags of William Henry Harrison or Zachary Taylor sell for as little as $5,000.

“Lincoln is always the most expensive,” Mr. Bridgman said. “He’s so popular that he crosses categories of collectors.”

Buttons are a lot like stamps: Limited supply and little oddities increase the value.

Rarer items may increase more in price but there are naturally fewer buyers for them. Mr. Berg said he paid $60,000 for his Emancipation Proclamation pen five years ago and thought that was a deal.

“I thought it was more valuable, but other people didn’t agree with me and I was able to buy it for what I did,” he said. “I’d rather have unique and important, and important isn’t always valuable.”

Some unique items will take longer to sell, like a land certificate signed by John Quincy Adams, for a tract in Zanesville, Ohio, on April 1, 1826. The price is $8,850. “Someone is going to buy this, but it’s going to be someone from Ohio or someone in the real estate business,” Mr. Gillis said of the piece, which he’s had for over a year.

But for others, no amount of money would be enough to sell. “These pieces are very important to me,” Mr. Cacchione said of his Reagan memorabilia. “I not only helped create them but they became world renowned. I’m very proud to have this collection.”

That, more so than money, is the main driver for any collector.

3 minutes ago from Texas
Someone purchased a

10 minutes ago from North Carolina
Someone purchased a

8 minutes ago from Tennessee
Someone purchased a

5 minutes ago from North Carolina
Someone purchased a

18 minutes ago from Texas
Someone purchased a

4 minutes ago from Ohio
Someone purchased a

17 minutes ago from Georigia
Someone purchased a

12 minutes ago from Tennessee
Someone purchased a

18 minutes ago from North Carolina
Someone purchased a

6 minutes ago from North Carolina
Someone purchased a

6 minutes ago from Ohio
Someone purchased a

10 minutes ago from Georigia
Someone purchased a

19 minutes ago from Tennessee
Someone purchased a

9 minutes ago from Texas
Someone purchased a

13 minutes ago from Texas
Someone purchased a

16 minutes ago from Tennessee