On Tuesday afternoon, three days after violent clashes between white nationalists and counterprotesters in Charlottesville, Va., President Trump insisted that both sides were to blame.

A reporter asked the president if he meant to put what he called the "alt-left" and white supremacists on the same moral plane.

It was a departure from the traditional remarks typically heard from presidents — and it has sparked a conversation about President Trump and the moral authority of his office.

Whether it was the calm, solemn addresses of Franklin D. Roosevelt, the plain-spoken calls to patriotism of George W. Bush, or the precise, professorial speeches of Barack Obama, Americans often have looked to presidents for moral clarity in critical moments.

While Americans often take the idea of the president as a moral leader for granted, Barbara Perry, a presidential historian in Charlottesville at the University of Virginia's Miller Center, says she has traced this concept back to Abraham Lincoln's Gettysburg Address in 1863.

The North and South were divided in the middle of the Civil War, and Lincoln sought to bring the country together by pointing to our common heritage, Perry says.

"He points to the fact that our common heritage is that our forefathers came upon this continent and created a new nation, dedicated to the proposition that all men are created equal," Perry tells NPR's Audie Cornish. "To me it is the ultimate presidential speech of unification, grief, calming — but also uplifting and inspirational."

In 1963, President Kennedy called upon Lincoln's address when he called segregation a "moral issue." In a televised address to the nation, Kennedy outlined his decision to authorize the deployment of the National Guard in Alabama, where Gov. George Wallace was trying to block two black students from entering the University of Alabama.

From the start of his presidency, Perry says Kennedy "walked a fine line" between the Southern segregationist and civil rights factions of the Democratic Party. But the violence against peaceful protesters in Birmingham, Ala., invigorated him to finally take a stand for civil rights.

"It pushed him over that line, and the new line was to declare that the crusade for civil rights was a moral crusade," she says. "And to say to the American people that this is an issue that is as old as the scriptures, and is clear as our Constitution."

Critics of Kennedy argued that the fight for civil rights would be a long process and that African-Americans should be patient.

"And he said, 'If that's the case, who among us would change our skin?' " Perry says.

Kennedy said, "100 years of delay have passed," since President Lincoln freed the slaves, yet African-Americans still were not fully free. His speech was the catalyst for the passing of the Civil Rights Act of 1964.

Unfortunately, not everyone responded well to Kennedy's remarks supporting civil rights. The morning after his speech, Medgar Evers, the field secretary in Mississippi for the NAACP, was fatally shot by a white supremacist. Kennedy himself was shot and killed in November.

The violence in response to Kennedy's speech put pressure on Congress. In July of 1964, President Lyndon Johnson signed the Voting Rights Act of 1964 alongside Robert Kennedy and Martin Luther King Jr.

This wasn't the last time a president sought to unite the country in the midst of unrest. After the Sept. 11, 2001, terror attacks, President George W. Bush delivered a speech at the Islamic Center of Washington. 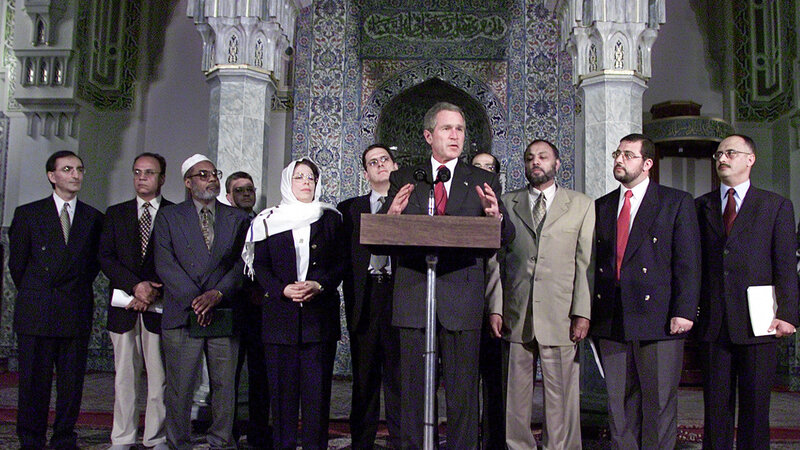 President Bush stands with Islamic leaders during a visit to the Islamic Center of Washington, Sept. 17, 2001.

"George W. Bush rose to the occasion ... to go to those who were of the same religion but certainly not of the same political persuasion as the terrorists who perpetrated 9/11, and for Bush to model the kind of behavior that we would want to see in this country," Perry says. "I think he should be given all credit for virtually no violence breaking out against American Muslims at that time."

Bush used very straightforward language to explain to American Muslims that he did not want to them to live in fear.

"Women who cover their heads in this country must feel comfortable going outside their homes," Bush said. "Moms who wear cover must not be intimidated in America. That's not the America I know."

The president is the very first symbol of American government that children comprehend. ... The president, especially in the modern era, comes into our homes ... and so we think of him as part of our life. And that's why it's so important for him to model the proper behavior for us.

Bush's speech wasn't fancy. He plainly outlined how he wanted Americans to treat each other.

"He not only models the behavior, but he gives a road map for that behavior," Perry says.

Perry also makes the point that Bush likely was thinking about Japanese internment during World War II, and had hoped his speech would prevent that from happening again.

But this task has gotten much more difficult as the country has become more polarized. President Obama was known as a great orator, but his speeches produced mixed results.

One of his most moving speeches came after the mass shooting at the Emanuel African Methodist Episcopal Church in Charleston, S.C. Obama spoke at a eulogy for Rev. Clementa Pinckney, who was one of nine people killed in the shooting.

"He conflated — I would say in a very positive way — the role of consoler-in-chief, mourner-in-chief and father of the country, with a clerical vision," Perry says. "I'll always remember watching and seeing the African-American clerics behind the president dressed in their cleric robes, and I think that that caused the president to feel very comfortable in that setting and to take on another role for himself ... to take on the cadence and the rhythms of African-American liturgy — and prompted him to break into the hymn 'Amazing Grace.' " 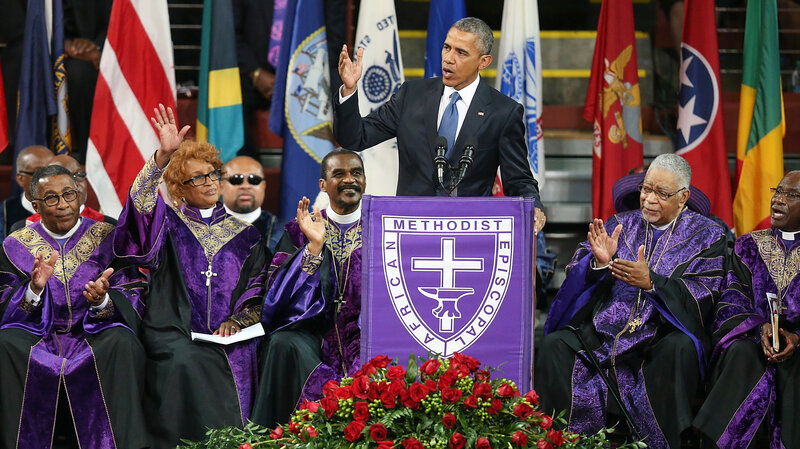 But there are limits to presidential rhetoric. President Obama's speech after the shooting at an elementary school in Newtown, Conn., in which he called for tighter gun control, did not lead to new policy.

"The president is not always successful in the persuasion, in terms of policy outcomes," Perry says, "but if he can be successful in at least calming and soothing the nation and showing us a way forward — that someday perhaps we will reach the policy point, as we did with President Kennedy and the '64 Civil Rights Act — he will have been successful."

So what, ultimately, is the responsibility of a president in critical moments? Perry says the president primarily serves to comfort the American people in times of crisis. We look to the president as a father figure.

"The president is the very first symbol of American government that children comprehend," she says. "The president, especially in the modern era, comes into our homes — first by radio, then television, now through all sorts of electronic gadgetry — and so we think of him as part of our life. And that's why it's so important for him to model the proper behavior for us."

As the country has become more divided, the limits of this presidential power have been made more apparent.

10 minutes ago from Ohio
Someone purchased a

6 minutes ago from Ohio
Someone purchased a

14 minutes ago from Florida
Someone purchased a

3 minutes ago from Tennessee
Someone purchased a

17 minutes ago from Florida
Someone purchased a

14 minutes ago from Tennessee
Someone purchased a

2 minutes ago from Georigia
Someone purchased a

10 minutes ago from Georigia
Someone purchased a

9 minutes ago from Florida
Someone purchased a

17 minutes ago from Ohio
Someone purchased a

4 minutes ago from Georigia
Someone purchased a

7 minutes ago from North Carolina
Someone purchased a

11 minutes ago from Florida
Someone purchased a

3 minutes ago from Ohio
Someone purchased a

15 minutes ago from Texas
Someone purchased a

16 minutes ago from Ohio
Someone purchased a

9 minutes ago from Tennessee
Someone purchased a

15 minutes ago from North Carolina