Every four years, Americans vote to elect a President.

And whenever a new President enters the White House, the National Baseball Hall of Fame and Museum has documented this through artifacts from the National Pastime.

To celebrate Presidents’ Day, the Hall of Fame as partnered with Google Arts and Culture to curate an online exhibit detailing the longtime relationship between the Presidency and the National Pastime. This exhibit is made possible through the Museum’s work to digitally preserve its collection via the PASTIME initiative.

Presidential artifacts at the Baseball Hall of Fame include a glove used by Dwight D. Eisenhower to throw out the first pitch in 1956, a bat autographed by Babe Ruth to Warren G. Harding, and presidential box seats from Washington’s Griffith Stadium.

The Museum has approximately 6,500 baseballs as part of its permanent collections, but a trio signed by Presidents dating back more than 100 years may be its most unique.

President Richard Nixon helped continue the Hall of Fame's Presidential tradition by becoming the 10th President to add his name to the group-signed baseball in 1969. (National Baseball Hall of Fame)

Schalk procured his first presidential signature on the ball from Taft – who in 1910 became the first president to throw out the baseball season’s first pitch – when he was Chief Justice of the U.S. Supreme Court in the 1920s. 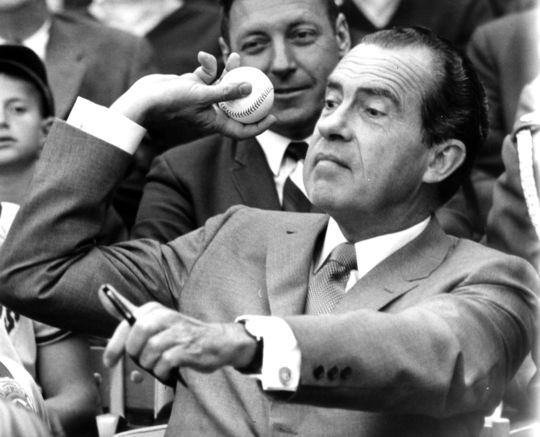 President Richard Nixon helped continue the Hall of Fame's Presidential tradition by becoming the 10th President to add his name to the group-signed baseball in 1969. (National Baseball Hall of Fame)

The first reports of Schalk’s special hobby reached newspaper sports sections across the country by April 1929 when Hoover, who once said “Next to religion, baseball has furnished a greater impact on American life than any other institution,” became the fourth President to autograph the ball.

“One of the most prized possessions of Ray Schalk, longtime big league catcher and now coach with the New York Giants, is a baseball bearing the signatures of four Presidents of the United States,” read a typical wire service story at the time. “Schalk called at the White House today and obtained President Hoover’s autograph upon the sphere, to add to those of Taft, Harding and Coolidge.”

After Schalk donated to the ball in ‘55, the Baseball Hall of Fame continued the tradition originated by its previous owner. In August 1961, John F. Kennedy’s signature was added to the ball. Kennedy (1961-63) signed the ball in the Oval Office during a 30-minute conference with Congressman Samuel S. Stratton of Schenectady (D.-N.Y), from the 32nd Congressional District that included Cooperstown, who was entrusted with the job of getting the signature by Hall of Fame officials. 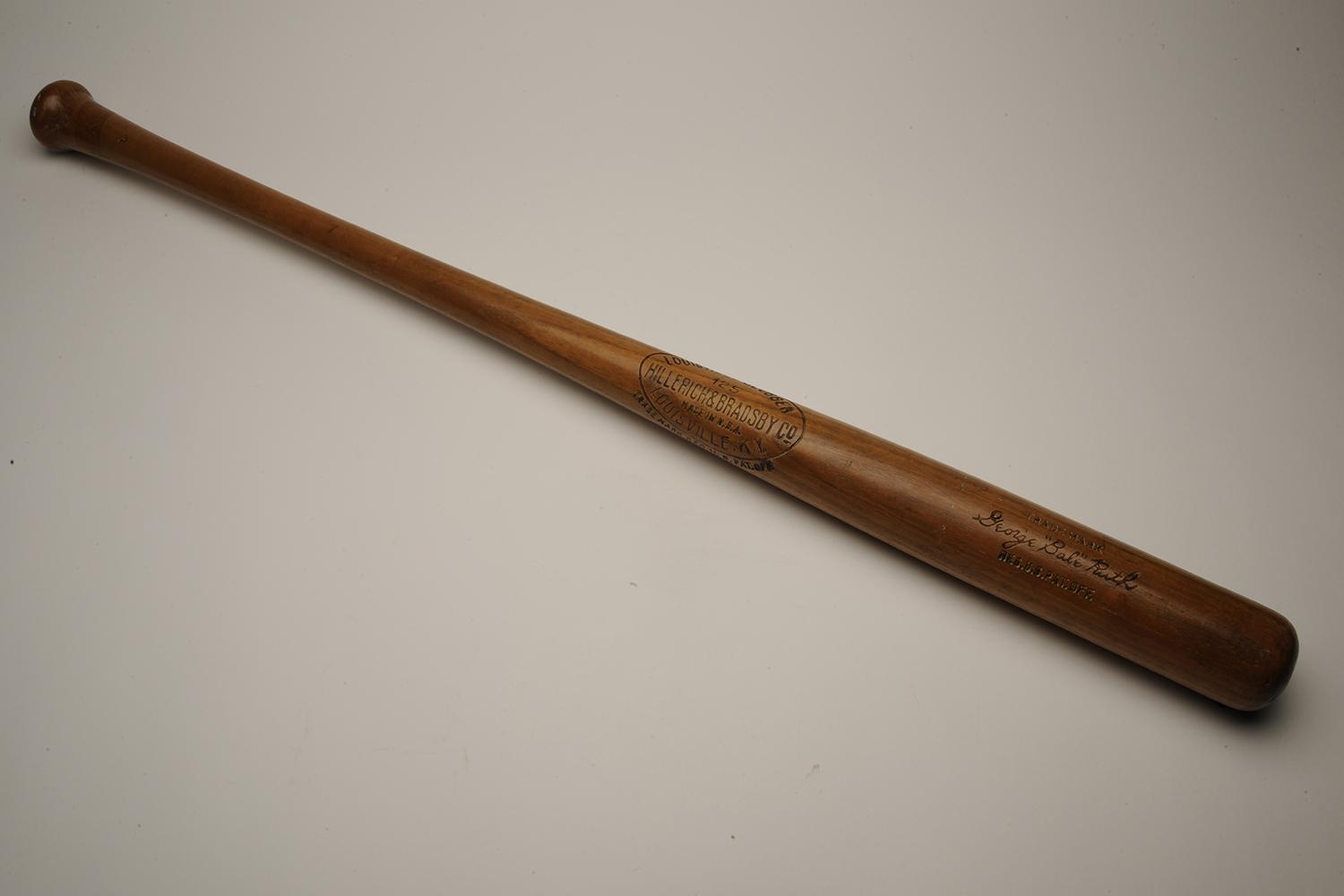 This bat was autographed by Babe Ruth and given to President Warren G. Harding. It is now preserved in the Hall of Fame's collection. (Milo Stewart Jr. / National Baseball Hall of Fame)

Rep. Stratton said after the ceremony, “I feel it is an appropriate thing that we have added the signature of President Kennedy to the historic ball. He’s done more for the outdoor sports and for physical fitness than any other president in history.”

News coverage of the day reported a near disaster, though.

“Showing the ball to the President,” it read in the Oneonta (N.Y.) Star, “Stratton remarked that the signature of President Eisenhower, written in blue ink, was fading and suggested that Kennedy sign in black ink.

“Kennedy agreed and asked a secretary to bring a bottle of black ink to him.

“She did. A moment later the ink was splattered all over the Presidential desk.

“The ball escaped the accident. Congressman Stratton said that he will ‘keep the ball tucked under my pillow’ until he can personally return it to the baseball shrine.”

Due to space limitations, the original Schalk baseball was deemed complete with the signatures of Lyndon B. Johnson (1963-69) and Richard Nixon (1969-74). Stratton, who had obtained the Johnson signature, also helped the Hall of Fame secure the Nixon autograph in July 1969. 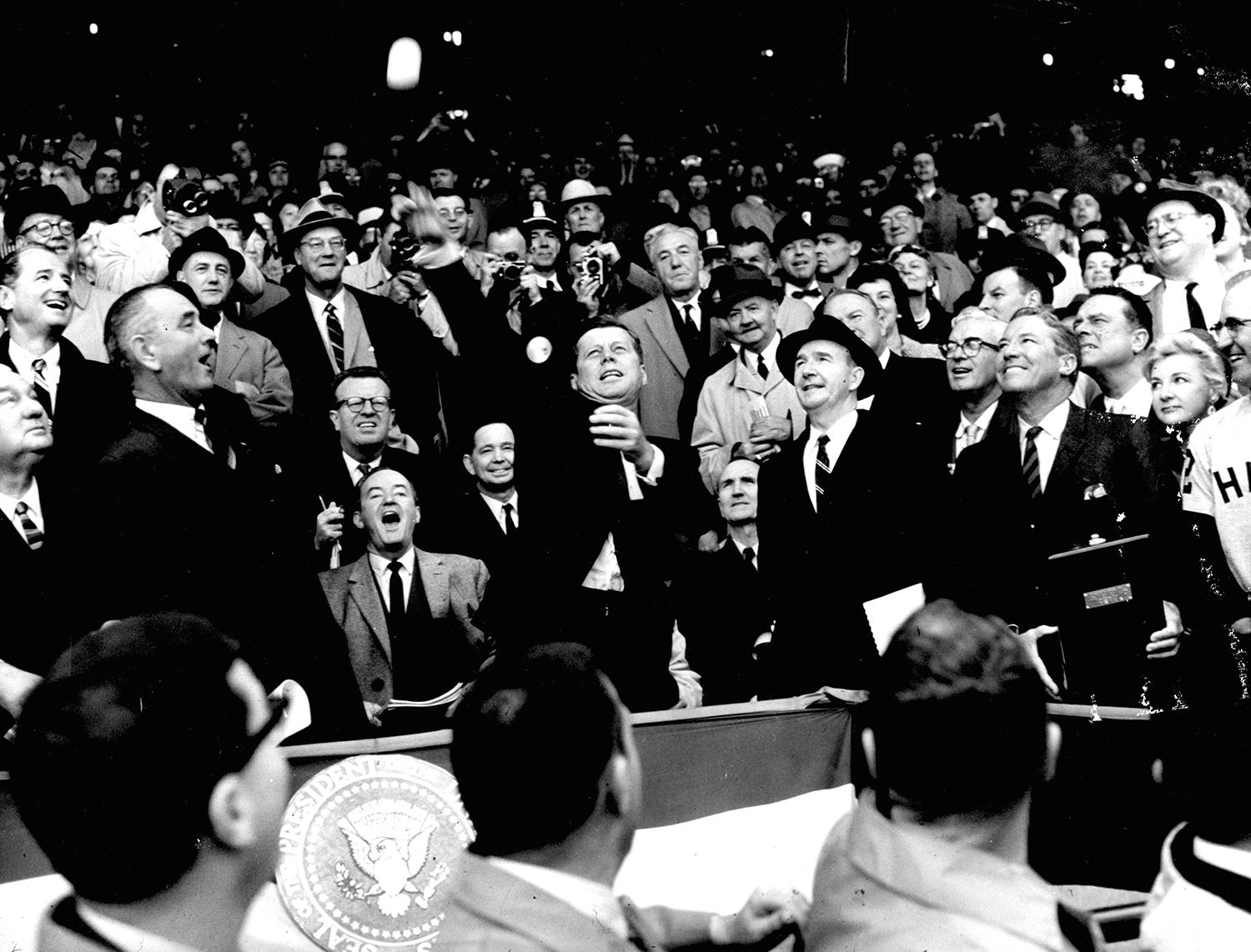 “This is the most famous autographed baseball,” Nixon said as became the 10th President to add his name to the ball in a ceremony in his White House office.

The Hall of Fame continued its now longstanding custom of presidentially-signed baseballs with a second ball first signed by Gerald R. Ford (1974-77) in February 1975. Helping the Hall of Fame facilitate the process this time was Congressman Donald J. Mitchell (R-N.Y.) from the 31st Congressional District.

In a letter in the Museum’s permanent collections from April 1975, Hall of Fame Director Ken Smith wrote, in part, to Rep. Mitchell: “At the museum we are grateful for your obtaining the Presidential signature, bringing up to date a custom dating to 1910. It was received in excellent condition and is a first row exhibit.” 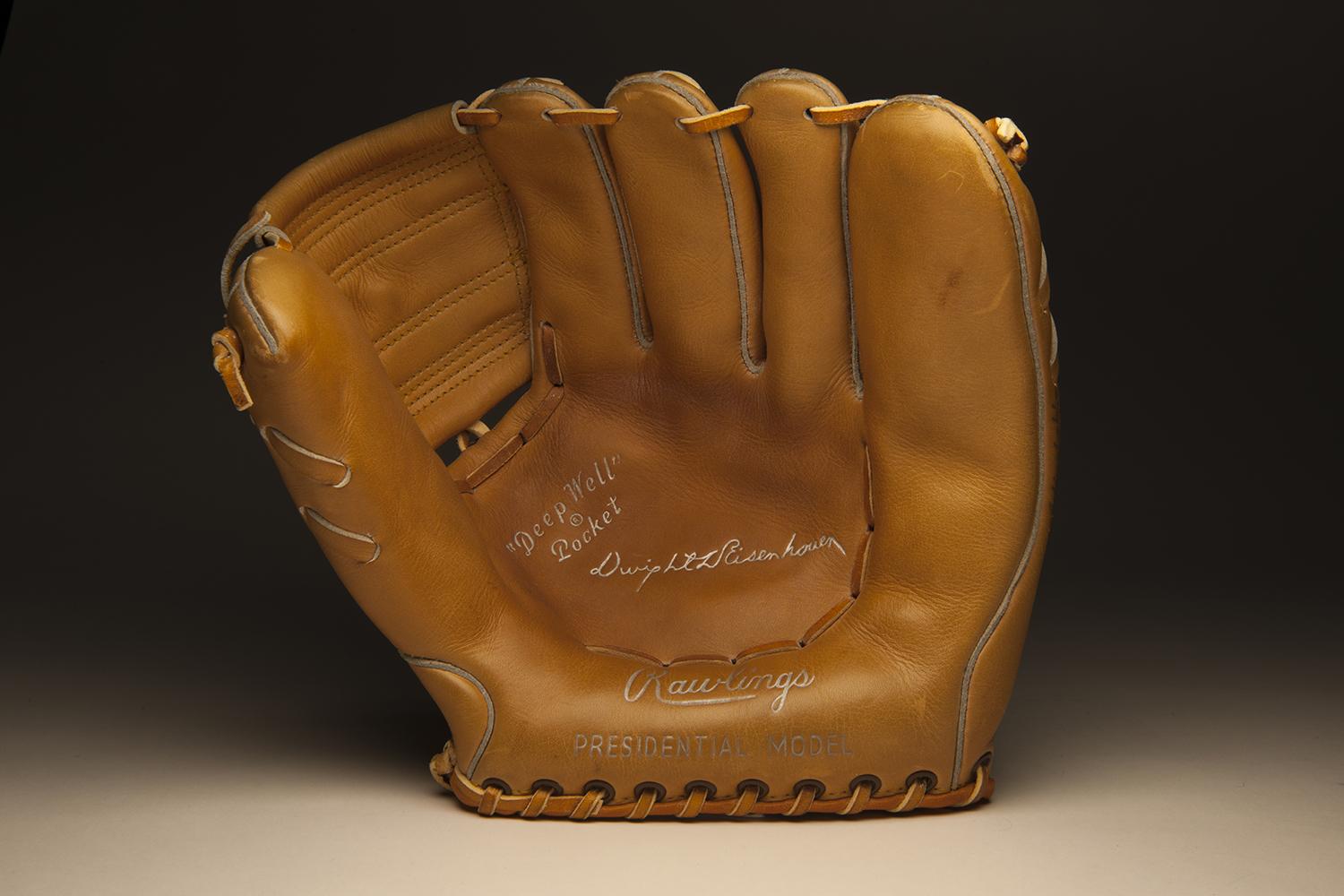 This glove, used by Dwight D. Eisenhower to throw out the first pitch in 1956, is one of many President-related artifacts in the Hall of Fame's collection. (Milo Stewart Jr. / National Baseball Hall of Fame)

The Reagan ball-signing, in March 1981, was part of a White House luncheon that included 32 of the 49 living members of the Baseball Hall of Fame. Reagan once recreated Chicago Cubs games for radio station WHO in Des Moines, Iowa.

“Before the luncheon,” said Hall of Fame President to Edward Stack to the luncheon attendees, “the President greeted the commissioner and myself in the Oval Office and was very gracious to sign our historic presidential baseball, which we have on display at the Baseball Hall of Fame in Cooperstown. He added his signature to the baseballs that have been signed by all the presidents since William Howard Taft. And tomorrow morning, it’ll be on display in Cooperstown for the millions of visitors to see when they come through the shrine.

“Also, we presented the President with a lifetime gold pass to the Baseball Hall of Fame, and we hope that he will use it many time in the future.” 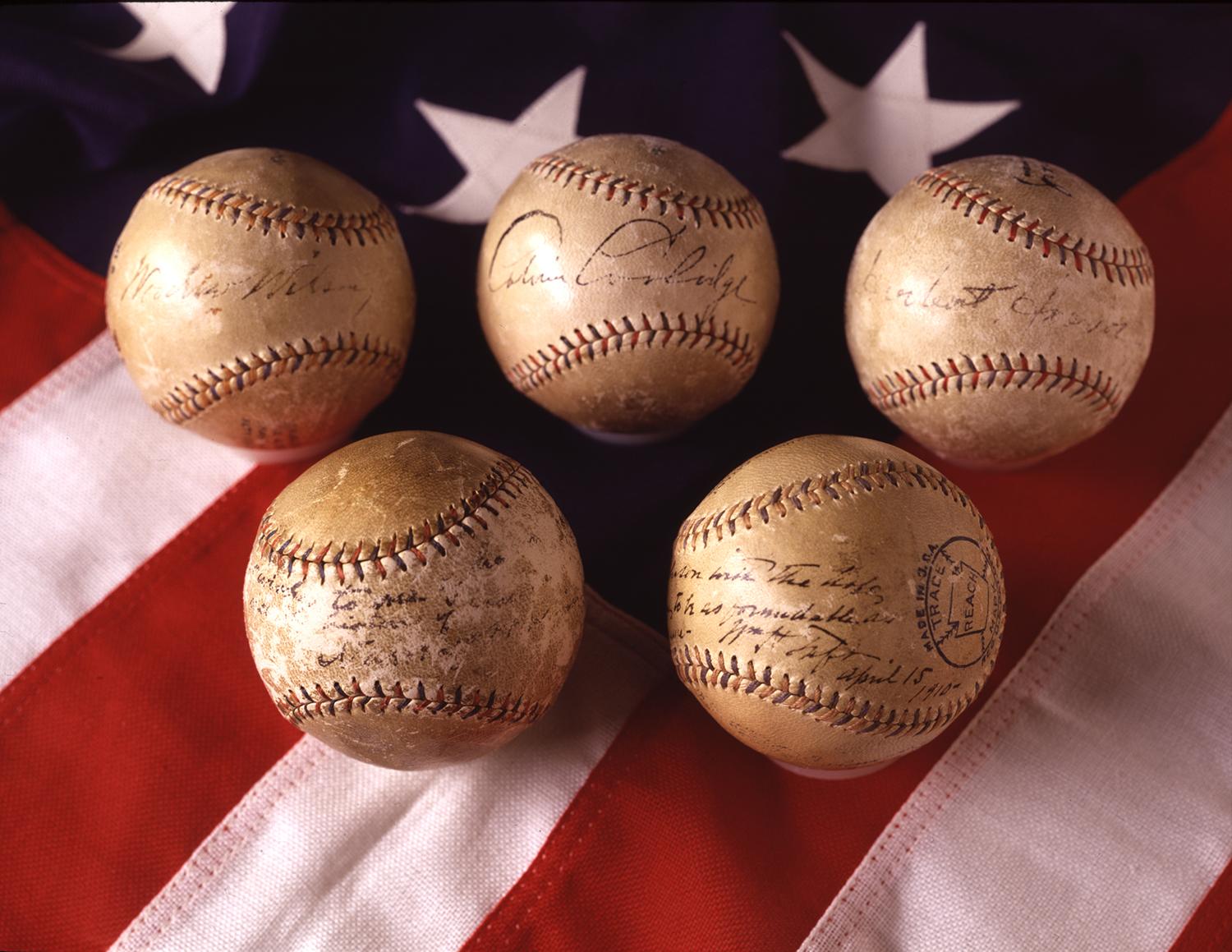 Baseballs signed by Woodrow Wilson, Calvin Coolidge, Herbert Hoover and William H. Taft (pictured above) are only a few of the many Presidential artifacts featured in the Hall of Fame's collection. (Milo Stewart Jr. / National Baseball Hall of Fame)

“The Hall of Fame’s three baseballs encompassing the signatures of every president from William Howard Taft through Barack Obama are certainly some of the most important cultural artifacts in the Museum’s collection,” said Hall of Fame Vice President of Exhibitions and Collections Erik Strohl. “When we received the first baseball in 1955 it contained signatures from Taft through Eisenhower. At that time our staff felt it important to keep the signatures on the baseball going, so we continued to send it to the White House to be signed each time a new President took office.

“After Nixon there was no more space left on that ball, so we continued the tradition by starting a new baseball with signatures. That ball has also been filled, so now we are on our third baseball and I expect the tradition to continue.”

According to Strohl, the president-signed balls are unique to the Hall of Fame’s collection because they are the only artifacts which have been altered after they have been accessioned.

“This is certainly not something we take lightly, but we do feel that maintaining a continuing link unbroken since Taft that shows the power of the connection between baseball and the Presidency is an important thing to do, not just for our collection but for the benefit of posterity,” Strohl said. “This relationship is a long and complex one showing the power that baseball has in this country and the presence that both politics and baseball play in American culture. 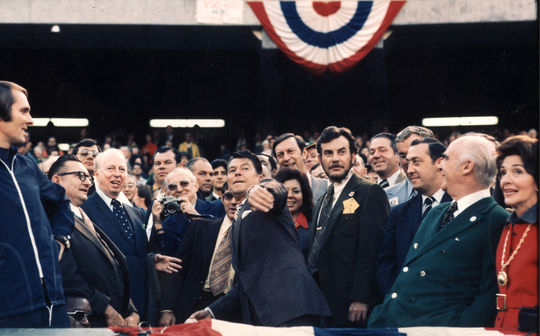 Future United States President Ronald Reagan, then the governor of California, throws out the first pitch prior to Game 3 of the 1972 World Series. His signature is one of those on the second presidential-signed baseball preserved in the Hall of Fame. (National Baseball Hall of Fame)

“The balls are also important because if we did not practice this tradition, we would have no signature on a baseball from John F. Kennedy in the entire collection. We have baseballs from other events for the other Presidents since Taft, but for JFK the group-signed baseball is the only one.”